In his series „Wortkörper – Word Bodies“, Johann Berger exhibits a deep connection to the written word, and even more to the pillars of the texts: the characters. This is largely owed to his longtime teaching activity at the Academy of Fine Arts in Vienna.

At the Complexity Science Hub Vienna, in baroque Palais Strozzi, he will exhibit sculptures that seem to be rooted in the design vocabulary of classical modernism. They are, however, derived from characters of ancient Greece and of the Hebrew language. The word bodies he is working with result from a discourse with Western intellectual history, whereas the technology to present them is strongly rooted in the present. To achieve these amazing works of art he uses different forms of 3D printing, CPI, and laser cutting. 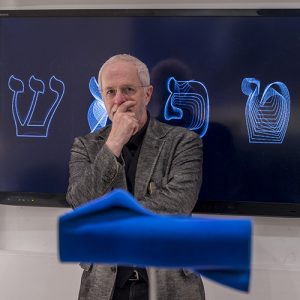 JOHANN BERGER studied at the Academy of Fine Arts, Vienna, where he also lectured from 1990 until 2005. He has been active as a writer contributing numerous articles on cultural science and art education as well as following his passion as an artist. His artworks have been exhibited at Galerie Subal, Kunsthaus Muerz, Kunsthaus Leoben, and many other locations. His career included the role of graphic designer in business consultancy and operations management. Today he is deputy editor in chief of Wailand and Waldstein publishers.