” The Beautiful Form, the Time, the Collapse” 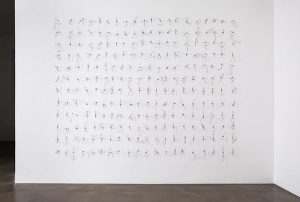 “The Beautiful Form, the Time, the Collapse”

The leg of a wooden chair bends – under its burden? The white ornament on a black background tatters at the corner – is it dissolving? Black-silver flowers fascinate with their dark allure – but what about this metallic material? Maria Hanl’s artistic works beguile us to a place where ornamental forms pose contradictions between a symbolic harmony and a toxic state. They are poetic, light, shiny, sometimes seem to fly; they are delicate and filigree. They are stagings at work with optical illusions, which only upon second glance prove to be manipulations of the material, as it were, in order to reach “the poisonous heart of things”, as Michel Foucault once said about his practice of writing, which is not unlike the practice of art. Maria Hanl’s works refer to those points where our system deceives us, obscures the senses, or euphemistically veils its violent side. There, where it goes no further or tips over into the absurd, where something breaks off or bends too far, crumbles or fades – where the system ends or collapses. The artist finds metaphorical constellations for how these processes are interwoven with our everyday life, which are able to capture or describe precisely these inexplicable states of exhaustion in a phenomenon. Among them, the chair whose dismembered wooden legs she binds in textiles as they buckle under the weight of the furniture; or an old lace doily which as a reproduced motif in the form of a puzzle seems to erode at the corners, where the last pieces were not stuck into place; or stylized metal flowers in a black vase whose petals turn out to be photographs of painted bombs upon closer inspection. Simulacra of death.

Maria Hanl is interested in the fact that our sociological system consists of numerous different systems, which we encounter on a daily basis but view separately because each one only comprises a small, often very specific realm of knowledge or operational measures. Hence, they always connect to numerous areas of life but due to their properties exclude all of the others at the same time. The systems – and this is what Maria Hanl’s works demonstrate – are per se already exhausted and limited because of their constitution. The artist implicates the autopoeitic loop of self-creation in a contradiction, for what happens when the condition for the creation of the respective system is no longer confirmed? Niklas Luhmann says in his thesis “that sociality comes about only in the fusion or synthesis of these three components. In other words, the social comes about whenever information, utterance, and understanding are produced as a unity that has feedback effects on the participating psychic systems.” And adds: “The psychic systems must behave in a specific way for this to succeed.” In her work Maria Hanl establishes that there are moments when psychic systems no longer behave as they should, meaning they do not always keep adapting to the system but rather transform it by appropriating it. Ultimately, these processes are creative but were always generated from their inner destructive exhaustion.